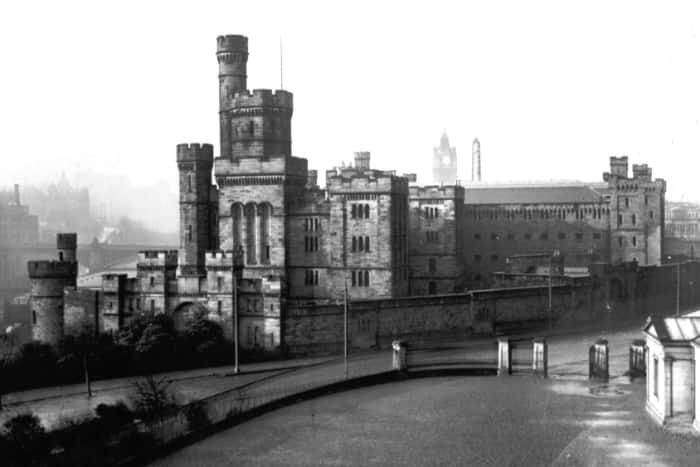 SCENE IN THE CALTON JAIL

Patrick Higgins, who was sentenced to death for the murder of his two young sons, suffered the extreme penalty of the law yesterday morning within the precincts of the Calton Jail, Edinburgh. On the 11th of September, after a two days’ trial, Higgins was sentenced to death by Lord Johnston, the jury having returned a verdict of guilty on the charge that the accused man had, between 25th October 1911 and 1st January 1912, assaulted his two children, William Higgins and John Higgins, tied them together with a cord, and thrown them into the Hopetoun Quarry, near the village of Winchburgh, in the parish of Abercorn, Linlithgowshire. The jury recommended Higgins to mercy “owing to the length of time which had elapsed between the act and the apprehension of the prisoner, and the want of expert evidence as to the mental condition of the prisoner at the time.” In view of this recommendation it was thought probable that the condemned man might be reprieved, but on Tuesday of this week the Lord Provost of Edinburgh received intimation from the Secretary of State for Scotland that he was unable to discover sufficient grounds to justify him in advising His majesty to interfere with the due course of the law. On the morning of the same day the decision of the Secretary for Scotland was conveyed by the Rev. Canon Stuart to Higgins, who received the news with a calm demeanour.

SCENE OUTSIDE THE CALTON JAIL

Despite the fact that an execution of the present day offers to the pubic view only the sight of familiar buildings, the arrival of Magistrates and City and Prison officials, and the hoisting of the black flag to half mast when the law has been vindicated, morbid curiosity brought out a motely crowd, who began to take up positions on the Calton Hill overlooking the prison yard, on the Portobello road in front of the jail gates, on the North Bridge, along Jeffrey Street – in fact at all points where the flag could be seen as it was hauled up the staff to intimate that the execution was over. On the stairs at the rear of the dwellings in the Canongate there could be seen small groups, and on the Calton Hill some grimly eager persons clambered on to the cannon at the foot of the Nelson Monument so to catch a glimpse of every possible movement within the prison walls. Many of the crowd were of the type that provide the social problem, but others seemed to be artisans and shopworkers of both sexes on the way to their days labour. The proceedings were devoid of incident. The sensation seekers had not even the melancholy satisfaction of hearing the pealing of the prison bell, which on former occasions commenced to ring fifteen minutes before the hour of the execution, but which yesterday was silent. A violinist, who is to be seen often in the streets of Edinburgh, took up a site to the west of the Nelson Monument, and commenced to play the “Lost Chord,” just about the time the condemned man was leaving his cell for the scaffold. Several figures were seen moving about the west tower of the prison, but otherwise there was no stir visible, and when the prison clock chimed the hour, the watching crowd grew silent and all eyes were turned towards the flag staff on the east tower. At three minutes past eight the flag appeared, and slowly rose to half-mast where for some seconds it seemed to hold the gaze of the people, some even focussing field glasses on the grim signal, though it was little more than a hundred yards away. In a few minutes the spectators had left their positions on the Calton Hill, many swelling the crowd that lingered in front of the prison gates to witness the departure of those who had been taking an official part in the solemn scene.

A LETTER OF THANKS

Within the precincts of the prison, an hour before the execution, there was little to indicate that anything unusual was about to take place. Officials, warders, and others were going about their everyday duties, and there were the usual frequent callers on business at the prison door. On such an occasion the admittance of strangers is of course more stringently supervised than under ordinary circumstance, and those whose duty it was to attend the carrying out of the dread sentence of the law had to show the special permits which had been issued by the Magistrates’ Department. At the previous execution in the Calton Jail representatives of the Press were admitted to the place where the extreme penalty was carried out, but on this occasion, it had been previously intimated that the reporters would not be permitted to go further than the gatehouse, a decision which was strictly adhered to, the Pressmen having to wait in a room which is allotted for the convenience of warders. From this place it may be mentioned, a view was obtained of the solemn procession to the scaffold when Chantrelle was executed. About a quarter past seven the city officers who were in attendance on the Magistrates arrived at the prison. Mr James A. Williamson, the city Superintendent of Works, under whose supervision the scaffold had been erected reached the jail about the half hour, and he was closely followed by Dr Henry Hay, the prison physician; Bailies Rose and Rusk, the two junior Magistrates, who were responsible for seeing the sentence carried out; Mr D. Lyon, depute Town-Clerk; Major Stewart, the governor of the prison; and Dr Sydney Smith, who represented Dr Harvey Littlejohn, the police surgeon. These gentlemen were at once conducted to the place of execution, which was in the well of a stair in the west block of the building, the same spot where Herdman paid the penalty for his crime fifteen years ago. The scaffold had been thoroughly tested by the authorities according to official instructions issued on such occasions.

Since his incarceration Higgins had, generally maintained the indifferent demeanour which he showed on the two days of his trial in the High Court of Justiciary. In the condemned cell he spent part of his time reading books and periodicals which had been supplied to him, and he also wrote letters to his friends and relatives, who visited him in accordance with the prison regulations, the interviews lasting fifteen minutes, and a warder being in attendance. On Tuesday the condemned man’s mother, who lives near Winchburgh, and who is described as a most excellent woman, visited him and took an affectionate farewell. Several relatives paid him a last visit on Wednesday and during the interviews Higgins remained in a calm frame of mind, which some might have attributed to callousness, but which it was said, was maintained by the unhappy man with the object of not affecting his relatives on such a sad occasion. In a letter which he wrote the day before his execution, Higgins expressed his thanks for the kindness with which the warders, especially Mr James Ross, the chief warder had treated him. The letter, which addressed to the Governor was in the following terms:-

you for your great kindness to me during my incarceration in the prison.

Hoping you will excuse my blunt way of putting it, but believe me it is

from my heart I say it. I also wish to thank Mr Ross for his kindness hoping

that you will acquaint him of this note. I would also like you to tell him

to thank all the officers that I have been under for their kindness and civility.

Higgins was an adherent to the faith of the Roman Catholic Church, and since he was sentenced to suffer the extreme penalty of the law he had been attended by the Rev. Canon Stuart of St Mary’s Roman Catholic Cathedral, Edinburgh.

The Canon arrived at the prison about a quarter to seven, and was taken to the condemned cell, situated only a few yards away from where the scaffold was erected. Here he remained with the prisoner until the time when the later was conveyed to the scaffold. At seven o’clock Higgins received the Communion, and mass was celebrated, the service lasting until half past seven. The remaining half hour was occupied by the prisoner in reciting prayer. Mr Lyon submitted the death warrant to the Governor of the prison. The usual process of identification having been gone through, Higgins was handed over to the custody of the Magistrates after a receipt had been given to the Governor.  A few seconds after the stroke of eight o’clock the procession to the scaffold was formed. The Rev. Canon Stuart, who preceded the prisoner, recited the prayers during the short walk from the cell to the place of execution. Higgins did not betray any emotion. When the time for the pinioning operations arrived he stood up with military bearing, just as he had done when he rose in the dock of the High Court to receive the sentence of death. He maintained his stolid demeanour to the last, and to those whose grim duty it was to witness the melancholy spectacle he seemed to be a man of extraordinary nerve.

The executioners were J. Ellis, of Rochdale, and W. Willis of Manchester, and at the scaffold they completed the pinioning operations. The white cap was pulled over the condemned man’s eyes and the rope was adjusted. When all was ready for the fatal moment, Canon Stuart recited the familiar words “Into Thy hands O Lord I commend my spirit,” whereupon Higgins, in a calm voice, solemnly replied “Lord receive my spirit,” and the bolt was drawn. At three minutes past eight the black flag was hoisted half-mast on one of the towers of the prison, announcing that the Winchburgh murderer had paid the penalty for his crime. The body which was allowed to hang for some time, was later in the day interred within the precincts of the prison.

Mr Lyon made a communication to the Press, in the course of which it was stated that death had been instantaneous. Canon Stuart said that Higgins acknowledged the justice of his sentence, and had said that drink and the neglect of his religious principles had brought about his ruin. He had paid great attention to the ministrations of the Chaplain, and declared that he had laughed and appeared unconcerned regarding his approaching fate when in the presence of his relatives on order to brighten them up. Canon Stuart believed that Higgins had been an excellent soldier. For two years the condemned man had had the supervision of a Good Templar Lodge in the Army, and he was a first class signaller.

The Story of Paddy HigginsDownload